(Edit: I had originally planned to let this kink stand on its own, gender-specific as it is, because it is a very specific kink (I don’t think there is a corresponding “Clothes Male, Naked Female,” perhaps because that seems to be the “norm” out there in ink-land.) But the first submission linked made me rethink that a bit. I am going to go ahead and broaden the scope of this to encompass any gender of Top/bottom, the broader kink being “Clothed Top Naked Bottom.” It seems to me that there is a broader discussion there that has little to do with gender.  So if you wish to talk about the dynamics of CFNM specifically, or the kink in general of the Top being clothed and the bottom being naked, post away.)

And the kink goes on!

Some time ago I put out a call on Twitter for suggestions for Kink of the Week topics. I have a master list, but there are far more things in the world to get your kink on to than my little brain can come up with, that’s for sure. When I started to get replies for things that I’d never heard of (I know, hard to believe, right?), I decided to see if the person that suggested it would like to write that topic’s introduction. And thus the Kink of the Week Guest Blogger was born!

(If you have a topic and would like to write that week’s introduction to it, email me at the “Contact KOTW” link at the top.) 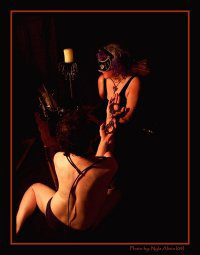 When I first discovered the joy of having men serve me naked, I had no idea the “naked” part was considered a fetish.

Then one of my toys sent me a link to a site that discussed CFNM (Clothed Female Naked Male). I shrugged. I just found it sexy to have my housework done by a naked man. I didn’t care why it turned him on as long as the house got cleaned and he had a cute ass.

And, because these are male fantasies, the CFNM encounters often involve men getting blow and/or hand jobs. (Hint: if the word “job” is involved, you’re not likely to attract the interest of a female dominant.)

Sites that claim to offer facts about CFNM, instead provide misinformation about female motivation, presumably written by wishful men. (Any site that refers to women as “girls” but males as “men” is about male fantasy, not female dominance.)

Motivations for participating in CFNM vary greatly for both genders. CFNM may or may not demonstrate a woman’s power over a man by keeping him vulnerable, presumably unable to leave the house without her permission to get dressed. It may or may not be part of a Dominant/submissive relationship in which she controls what he wears inside and outside the home.

CFNM may or may not allow a woman to objectify a male’s body (especially if it’s attractive to her) giving him a taste of what she’s experienced her entire life.

CFNM may or may not include humiliation play, such as making disparaging remarks about general or specific aspects of the man’s appearance including (in some cases) the size of his penis, his virility, or other aspects of his masculinity.

For a CFNM scene at a party, women may dress up in fetish wear including boots or high heels. But, if CFNM is the household status quo, she’s just as likely to wear comfy sweats and fuzzy slippers.

If you’re interested in CFNM, I recommend you first determine what you find appealing about it and what you don’t think you’ll enjoy.

Women, does a naked male body turn you on? Do you want to humiliate and/or control a man? Do you enjoy making decisions for your man, including whether or not (and when) he wears clothes? Or do you just enjoy a naked ass peeking out from the bathroom as he scrubs the floor on his hands and knees?

Your motivation doesn’t have to match your partner’s, it just needs to be compatible.

And, much of your motivation may be determined by whether or not you want a relationship that incorporates CFNM or would just like to engage in the activity for fun once in a while, perhaps with different play partners each time.

Once you’re clear on your motivation, you will find it easier to seek someone who shares your interests or try to incorporate it into your existing relationship(s).

Yes, there’s a dating site just for people looking for CFNM encounters. But, rarely can a single fetish sustain a relationship, especially with a fetish as complex and with as many variations as CFNM. And, of course, in a TPE (Total Power Exchange) relationship whether or not the male enjoys doing the housework naked may not matter to his owner.

If you’re involved in CFNM, perhaps you’d like to join the conversation by sharing how you discovered you enjoy it? What about it rings your chimes? How important is CFNM to your relationship?

And, of course feel free to ask questions. I’ll do my best to answer them. 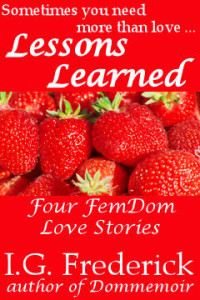 It’s time to Get Our Kink On and talk about biting!
New to #KOTW? Here’s how to participate:

If you’d like to submit to the Kink of the Week but don’t have a blog, or want to do so anonymously, send your submissions to piecesofjade at gmail dot com and I’ll post it for you!

*Please note: Kink of the Week is intended to highlight only ORIGINAL, CURRENT content.

2.(CFNM) I Have Members Who Love This!

4.Keeping Her Clothes On

5.Mine are On, Yours are Off

@WrittenInKink Lol A grey on black is easier. If it's WordPress it's easy peasy to change. And I realised it looked like I was subtweeting you but oddly it was not your blog which caused my initial tweet