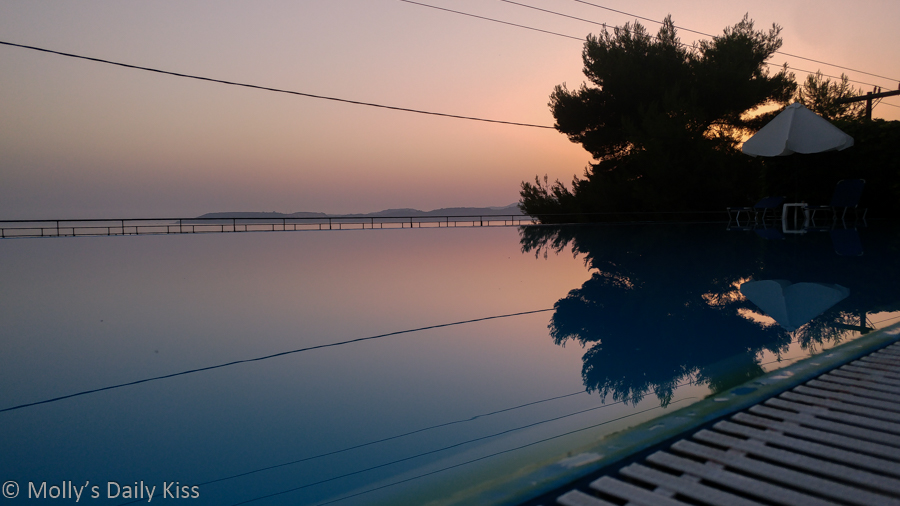 Wrapped in towels, and shod in Flip Flops we headed for the pool. It was a little after Midnight. We may have been fueled slightly by alcohol.

We stopped just before we reached the pool.

“You said the lights went out at Midnight.” My companion looked around to see if anyone was about. The pool was flooded with light.

“They do go out at Midnight, any minute now.” I looked around, we had the place to ourselves. I walked up to the pool and started to retract the cover. The mechanism made enough noise to wake the dead. I wound back the cover to reveal about half the pool. We did not plan on swimming lengths. In fact we didn’t plan on doing much swimming at all. We were here for sex. Right on cue the lights went out. Suddenly I was plunged into darkness while balancing on the pool edge and struggling with the cover mechanism.

“Fuck I can’t see a thing!” I complained. After a few moments I decided to leave the cover mechanism and go join my companion. She dipped her toe into the water.

“Well whatever the gauge says it still feels cold.” Despite her misgivings at the temperature she dropped her towel and gingerly entered the pool. She pushed off and swam a few strokes.

“It’s quite nice once you’re in.” She whispered in voice that could be heard all over the nudist club. I climbed down the steps into the water, it struck cold and made me gasp. I swam over to my companion and we fumbled in the water, touching and kissing.

“We need to be a bit further along, it’s too deep here.” I suggested. We moved until the water was at nipple height. She wrapped her arms around me and I felt her warm body against mine. Her tongue probed my mouth. A few moments later I was getting in the mood. The risk of getting caught was exciting.

“Ooh you are excited.” She gave me a playful tug. She pulled herself up and wrapped her legs around me, I was fumbling with my cock trying to find the entrance.

“Not there, up a bit.” She wriggled around and lowered herself onto me. I grabbed her bum and we floated in the water. I bounced her up and down.

“Oh that’s nice, you’re in really deep.” She pulled herself onto me and bounced harder. By this stage we could have had an audience cheering and applauding and I don’t think we would have noticed or cared. A few more moments of bouncing and thrusting and I was well past the point of no return.

Bouncing faster is counter productive to delaying an orgasm. She caught her breath in that special way that precedes her climax. She grimaced and gasped. She bounced much faster and ground herself against me. My legs buckled and we floated away, spluttering and gasping as we lost control. We regained our balance and she lifted herself off. We hugged in the water. Nervously we looked around and listened. Silence. Nothing. We waded to the shallow end and climbed out of the pool. We wrapped our towels around us. I grabbed the pull cord to the cover and pulled it closed. We ran for the privacy of my chalet. Once inside we grabbed each other, giggling.

Sex in a pool, to be fair, is not that good. It does, however, feel very naughty. The risk of getting caught is exciting. It’s 4/10 for the sex but 11/10 for the fun and excitement.

@DigitalVoyeur Soon. Never stop too soon when things are flowing. You only come once the story has!

I have written over 2000 words of filth and my cunt is absolutely aching.